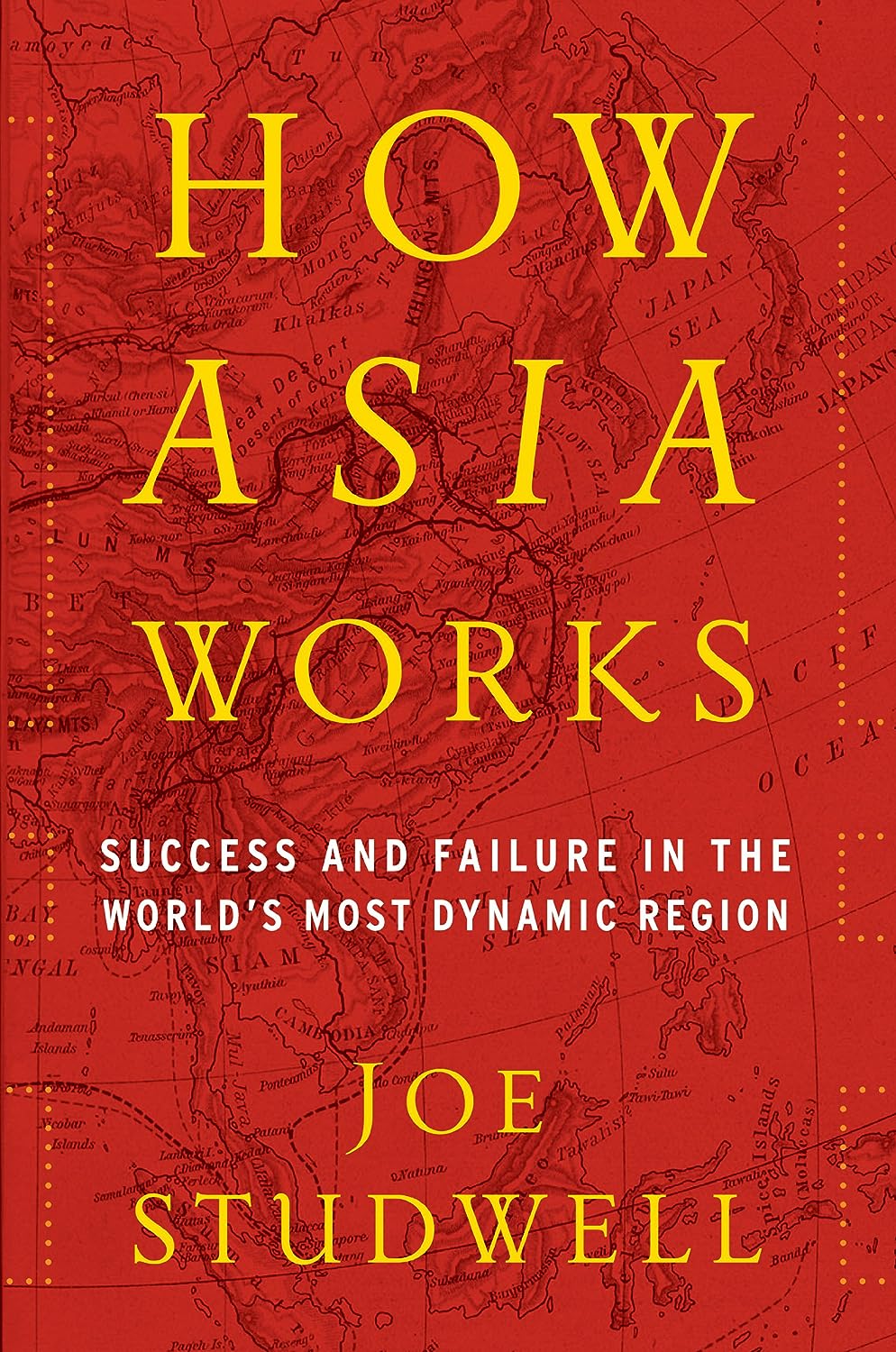 This is one of the most important books of 2014, which attempts to answer the question of why the East Asian economies of Japan, Korea, Taiwan and China have succeeded and the Southeast Asian economies did not. Mr Studwell’s experience as a practicing journalist seems to have served him well. His second book “Asian Godfathers”, was an in-depth look into the crony-capitalism that characterised the Southeast Asian bloc.

This book is a book of one idea. The thesis of the book, baldly stated, is that there are three important steps to creating an advanced economy. Three steps, in depth-

1. Land reform to ensure agricultural base of the country can provide the capital base for manufacturing. The first step is to get the majority of households to build a modicum of domestic capital - this allows the population to play dual roles of savers (saving at an elevated rate, and providing capital for the next step, manufacturing) and consumers (demanding basic consumer goods and durables). How specifically is that to be accomplished? The key is to fully utilise the one cheap resource in the economy - labour - fully, in the sector that makes up the majority of the economy, agriculture (usually about 70% of the economy will be in agriculture). The best way to maximise productivity is to institute land reform to ensure that farmers have an incentive to make their lands as high-yield and high-intensity as possible, resembling high-yield household gardening rather than large plantations, which are more inefficient.

Further caveats and dangers are highlighted: land reform must be carried out properly - besides apportioning the household income levers properly, the monopsony problem needs to be solved - to avoid the problem of a single buyer taking away all the surplus that the efficiencies the household farmers (gardeners) accrue. In case of a monopsony, the buyer will is much more likely to save less (providing less capital) but also in consuming may have a skewed demand profile, choosing luxury goods such as real estate instead of basic materials like cement (which are probably not domestically produced, foreign enterprises thus learn on domestic capital’s learning curve).

2. Manufacturing with export discipline, domestically developed technology, and eliminating losers. Even after giving households the capital to demand basic goods, there is a basic cap on the productivity of agriculture sector. Therefore a second economic intervention will be required to raise the profile - Manufacturing, and it is the best way to take people off the land. This is because fundamentally, manufacturing allows for on-the-job learning, which allows human capital to be built on the job without deadtime; and 80% of the world’ economy is built on manufacture. There are at least two major reasons militating against a services-based economy. The first is that the world’s economy has been stuck on 20% of the world as services for a quarter of a century, and the second is that there must be dead-time of schooling in order to develop the capabilities for a service economy. But import substitution industrialisation did not work for the Southeast Asian economies, and Studwell identifies the Northeast Asia (NEA) economies as developing manufacturing industries with export discipline, with sanity-checks on manufacture. This is what Studwell identifies as the key mistake of Mahathir’s creation of Proton in his Look East campaign. Instead of being challenged on the global stage, the domestic firms reposed in high profit but competitive domestic markets. Proton for instance produced cars mainly for the domestic market, and not for overseas markets.

Two caveats: A country needs to ensure that technology Is developed in-house, and operational technology is not simply imported-in. “Kit assembly”, as Studwell calls it, was what Tommy Suharto’s Timor Car and pre-Mahathir Malaysia was engaging in, which did not lead to any manufacturing learnin. The second caveat is to eliminate losers rather than to pick winners. To get a higher quality end-product, the domestic manufacturing industry should create overcapacity, and then slash it by a Darwinian process of winnowing. That is what happened with successful South Korean chaebol - “most of the top ten chaebol of the mid 1960s had disappeared through forced mergers and bankruptcy by the mid 1970s, and half of the new group had disappeared by the early 1980s. Few Koreans, let alone foreigners, now know the names of some of the biggest chaebol of the post-war era, such as Samho, Gaepong, Donglip, Shinjin and Dongmyung - and that is because they are long dead.”. Instead Mahathir picked a winner with Proton - he created a single domestic champion, rather than allowing the Darwinism of the market to pick out a single winner. The extended discussion between Mahathir and South Korea is where Studwell expands on his formula for ensuring the second and third keys are

3. Financial coercion of the system to best allocate the capital amongst the best performing future industries, and not only to industries with short term profits. The siren call of speculative short term investments, like luxury real estate, can detract from more productive future investments. A key tactic practiced was central bank rediscounting, where banks which loaned to companies with high export performance and certain sector focuses could qualify for additional loans from the central bank. Japan pioneered it in NEA, and Korea practiced it to an extreme extent, General Park Chung-Hee choosing to do almost unlimited rediscounting for export loans and other government-approved projects, which led to 15-20% inflation rates annually). Korea is an interesting case in point, because while banks provided an unattractive value proposition - low nominal interest rates and negative real interest rates, citizens continued saving their money in domestic banks instead of spending it, because of three factors: (A) the dominant consideration was the need to hold money against future liabilities in a state with little welfare; and (B) because of massive taxes on imported consumer goods, leaving not much to spend on. and (C) in bad years, a multi-year moratorium was imposed on kerb lending (3rd party money-lending), such that the general public would have to accept no interest on their funds in the kerb market, and  would have to go to state-approved banking system

The caveats: Beware reliance on foreign capital unless you have goods other countries want. The question of “can there be an over-reliance on foreign capital?” is answered in the positive here, the wisdom of a domestic capital base created in step 1 is clear, when looking at Southeast Asian economies. In Japan, FDI was not very much used, though it was used for a very aggressive industrial development push (Korea). In Korea the danger was mitigated (the wisdom of the step 2) because Korea was too interconnected with the world for foreign debt accumulation to be dangerous - payment of interest and principal as a share of exports was only 20% in the early 1980s. Export discipline had caused the world to demand Korean goods. In Southeast Asia, though capital fight occurred in the Philippines in the 1980s due to its corrupt financial practices (unlimited rediscounting on anything, central bank as lender of first resort and not last resort), and in 1997, the Asian crisis started when the Thai government could not defend the baht against currency traders who had taken a short position against it.

Another caveat: Short-term profit seeking inevitably comes into the command and control economy as companies become financially stronger in both the case of Korea and Japan, in later years (Japan in the 80s, Korea in the 80s and 90s), there was a redirection of funds from these low-risk developmental investments to higher-risk plays such as real estate (Japan, Korea) and short maturity foreign debt (Korea leading up to 1997 East Asian crisis) that led to crises. In Japan, this was because domestic banks were losing their traditional customer loan base of Japanese firms, which chose to take advantage of Eurobonds (bonds in foreign markets), because they had less terms and conditions attached to the money. Therefore the Japanese banks took higher risks in real estate. In Korea, a different problem arose - chaebols became too big to fail (a chaebol failure would bring down the bank), and used their clout to get banks to loan them funds to speculate in real estate. In addition, the lifting of capital controls in the 1993 (short term offshore borrowing was allowed) allowed Korean banks to borrow from foreign banks, including SEA ones. In Studwell’s view, the IMF solution was, for once, the correct one - a Western-style independent central bank, wholly  independent commercial banks, large foreign controlled banks, increased rights for independent investors in stock and other markets. In both Japan and Korea though, the increasing economic clout of the strategically important firms (financial liberalization for Japanese firms allowing them to seek funding overseas, and the increasing size of chaebol to become too-big-to-fail) led to increasing short-term profit-seeking that led to crises; these are portrayed as the inevitable growing pains of a new economy.

There is a short final chapter, of which I found especially interesting China’s attempts to curtail the power of its largest private enterprises - through means such as renshi tiaozheng (rotation of leaders of its three oil companies); and its playbook focus on manufacturing industrial equipment procured by other governments or state-owned enterprises, e.g. power equipment for the world, such as the ‘ultra-supercriticals’, the prodcution of 1,000 megawatt super-high temperature turbines; construction telecommunications. This is due to China's difficulty in coming up with a real consumer product powerhouse.

My takeaways: For countries looking to grow, they should look to follow this model. It will be hard, but as Studwell’s iconoclasm led him to profile the crony capitalism that goes on in Southeast Asia, here his iconoclasm serves him well in separating the economics of development (protectionism a la Friedrich List), and the economics of efficiency. If anything, we are wiser for Studwell contextualising laissez-faire economics from Adam Smith’s day: The recommendations of Wealth of Nations were written when protectionist Britain ruled the world and no one could sail into a British port without a British flag. To insist on free-trade on equal terms is much like Chelsea football club saying it’ll take on any 3rd division football team on equal terms. Nourishment along these 3 steps will be necessary.